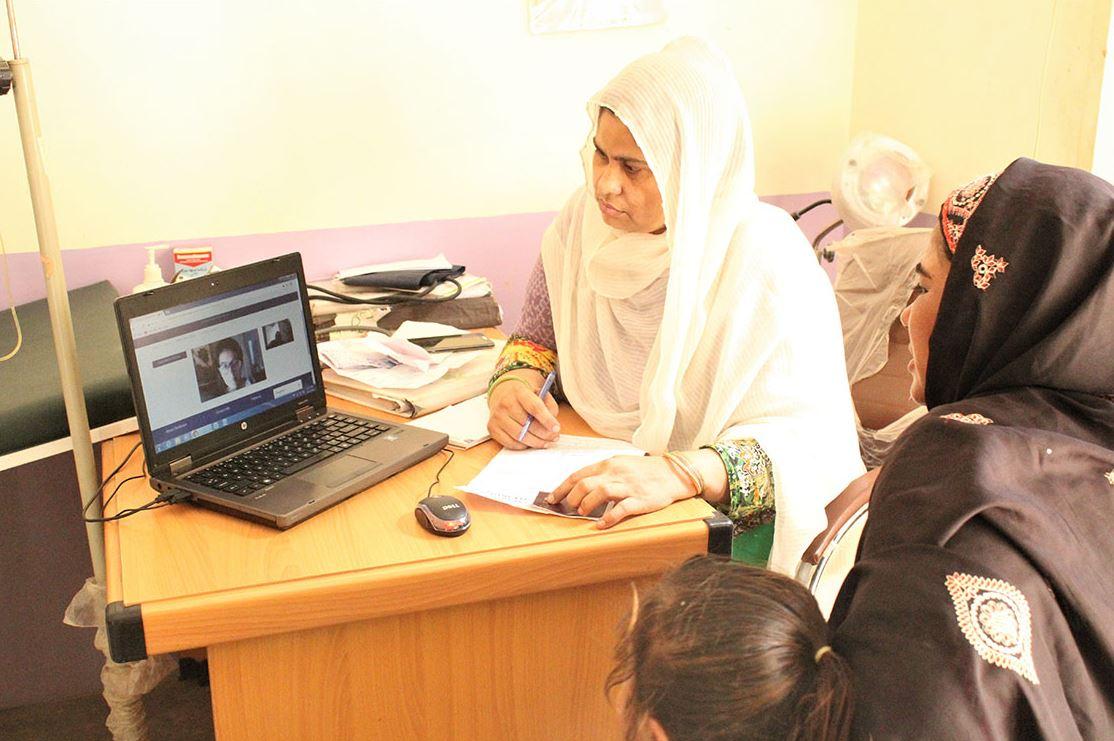 The Country Connector engages with national health systems and the people that lead, manage and operate within these systems to build understanding of health governance of the private sector in health, to learn from practice, to improve practice. Systems and the actors that work in them are made up of stories. These have rebounded during COVID-19. We would like to share the story of Sehat Kahani, an impact-driven digital health solution, that connected women in Pakistan - as patients - primary care workers - general practitioners and clinical specialists, during COVID-19. This story is based on an interview with Sara Saeed, the CEO and Co-Founder of Sehat Kahani.

Key messages of relevance to governance and digital health innovations

The start-up story
In Urdu, “Sehat” means health and “Kahani” means story. Established in 2017, and co-founded by Sara Saeed, a medical doctor, the vision brought to Sehat Kahani was to democratise healthcare access for all using technology. The company sought to solve two health issues in Pakistan, access to quality care and facilitation of female doctors in medical practice. In Pakistan, a country of 210 million inhabitants, more than half of the population doesn’t have access to basic primary healthcare, as Dr. Saeed reported. On the other end, Pakistan has around 250,000 doctors, about 80% of which are female doctors. Only about 40% of female doctors continue working after graduation while male graduate doctors often leave the country for better work opportunities abroad. In short, the Pakistan health system generates a lot of medical doctors, but there is a huge supply-demand gap when it comes to doctor-patient interaction. There are also notable discrepancies in human resources between urban and rural areas, particularly for doctors. An estimated 14.5 physicians per 10 000 population in urban areas is contrasted with 3.6 per 10 000 population in rural areas all over the country.

To address these issues, Sehat Kahani connects a large network of predominantly female doctors to patients who need health care, using a chat video and audio consultation so that a doctor can consult from a place of comfort, and a patient can access the same quality of services as they would do with a physical doctor. This is done through telemedicine clinics in low-income communities. A mobile application was added in 2019, allowing smartphone users in urban and peri-urban areas to see a doctor using the App.

As Sehat Kahani is a for-profit impact business, every clinic has to be sustainable within 36 months. Consultation fees are 50 -100 rupees (USD 28-55 cents), which represents a more affordable cost compared to local primary and tertiary care. The company is based on a hybrid principle, subsidising services in low-income communities and having a higher profit App, which is marketed to companies and middle-income populations.

Sehat Kahani addresses a gap in PHC services at community level. Midwives and Lady Health Workers (LHVs) are supported by the government to open clinics and provide basic maternal child health services, primarily focusing on antenatal care, delivery, family planning and postnatal care. They have expanded their service offer to PHC but lack training. Sehat Kahani fills this knowledge and practice gap by giving midwives and LHVs the tools (e.g., training, medical protocols and equipment) to become better informed PHC providers. This is done in collaboration with a qualified doctor who supports patient diagnosis, treatment and the follow up plans.

The human story
Sehat Kahani employs a largely female medical workforce, “we have a network of 7,000 doctors and 90% of them are female doctors…and around 50% are home based and have returned to practice. Returning to practice is a significant step for many of these women,
“…we've had doctors who've been in depression, we've had doctors who face domestic abuse, who face mental abuse… There is emotional and mental turmoil in a woman who studied 4-5 years getting a degree and not being able to work not by choice, but by force, that she's instantly switched into a role where she's a homemaker or a housewife, which is perfectly okay if you want to do it. But these women become doctors to serve communities to fulfil the oath that they took…the oath becomes very important in your years of medical college. And it was taken away from you.”

“…they fight with me if any clinic nurse is not performing well or there's an issue in the clinic so they are very, very committed to work in communities which they would not have ever accessed if not for telemedicine. We have doctors who are sitting in Karachi, working in clinics in KP in the mountains and they've never been to that area. But that's the power of technology, that it does equalise a lot of factors that are limited by logistics or accessibility.”

An equally powerful story is found with the female health workers based in the low-income clinics. Sehat Kahani works with community health providers,

“…who are women in the communities who've studied and who have trained after facing a lot of hardships in their families…so these are the kind of health workers that we work with, who have a space, who are in a mindset that they want to learn, they want to adapt to technology, they are okay to give the decision-making power to a doctor rather than keeping it to themselves. And who also want, in actuality, the quality of health services to be improved. And there are many such women like this in the community.”

The COVID-19 story
When COVID-19 hit Pakistan in early 2020, Sehat Kahani was one of the very few entities able to provide telemedicine through a mobile App. Sehat Kahani's telemedicine application was used by the Federal Government under an initiative called Digital Pakistan, in the first wave of COVID-19. COVID-19 telemedicine consultations were provided for free and managed to connect about 70,000 patients with COVID-19 testing and treatment services. The population was also able to get in contact with doctors for other health-related issues. Both COVID-19 and other essential health services were provided free of charge during the first wave of COVID-19 (from March 2020 to August 2020). Since then, COVID-19-related consultations have remained free-of-charge.

“Within our company, we saw 340% growth between 2020 and 2021. And a huge majority of those patients had never tried telemedicine services before.”

The App was also used in 65 intensive care units (ICUs) across Pakistan under a project with UNDP and Health Services Academy and federal/provincial governments. This allowed health workers to access critical care consultation, through a virtual Critical Care Specialist, of which there are only 70 in the country. This service continues in some of the supported ICUs while other hospital units have upgraded to have critical care doctors on site or have been returned to pre-COVID 19 purposes.

In partnership with the WHO and the federal government, an additional six clinics were launched in hard-to-reach areas during COVID-19, and a specific focus on sexual and reproductive healthcare services was added. As part of this initiative about 1,500 doctors from across three provinces (Baluchistan, KP and Punjab) were trained on sexual reproductive services, primary health care, and telemedicine. Sehat Kahani also worked with UNDP in five universities in KP to facilitate student access to mental health care specialists. Clinics were also availed in the universities so that students could access a broad range of medical consultations.

“Our clinics became a blessing in disguise for many patients as tertiary hospitals closed down...the Sehat Kahani clinical services were in high demand due to strict adherence to infection prevention and other SOPs.”

The health system story
The testing and adoption of telemedicine by some provincial and federal governments, in the context of COVID-19, has primed the digital health market. There is now more competition with Sehat Kahani’s App business but not the low-income telemedicine services; “whenever there's a market opening, people usually follow the commercial angle of the solution rather than the impact angle because the commercial angle is easier, quicker, scalable.”

Policy and regulation of digital health has followed. Telemedicine consultations were previously a “grey area” as it was not clearly stated what they could or could not offer. COVID-19 changed that, “people became used to the idea of having virtual doctors, governments saw this as an opportunity to provide more doctors in low-income communities and bridge the gap between doctors and patients.” This prompted the development of a national telemedicine policy, launched as a Presidential initiative. The government has also developed a national health care framework to regulate digital health. Challenges still remain with implementation as provinces need to develop bills on telemedicine, which is done at a different pace in every province. Nevertheless, Sara is optimistic, “the process of other provinces adapting to the policy and creating the regulation will be much faster than where we were two years before.”

Quality and ease of care has guided the use of technology. This was the primary purpose of the company and remains its North Star. Sehat Kahani initially used an ‘off the shelf’ software but soon realised it had to be customised to the needs of healthcare providers and the Pakistan context. A bespoke clinical solution was then developed, which provides the possibility to customise bandwidth, “we know that when we do a needs assessment, we do a tech assessment...we don’t open a clinic until we have the green signal from the tech assessment team.” Currently, the software is able to work for 83% of all telemedicine consultations; in instances where this is not possible, the patient history is recorded, and a backup video consultation is done using WhatsApp or Skype. Updates to technology are guided by quality and ease of care, and have included a clinical decision support system, greater data visualisation capability, greater ease and more flexibility for the users of the software.

The future story
Digital health impact needs stewardship and alignment with public health goals. While progress has been made in digital health particularly during COVID-19, it has been in silos which, in the long run, may limit its impact. In Sara’s view, it is a matter of connection and intent: the national health care framework has to be disseminated at the provincial level, and the provincial level has to commit to digital healthcare, targeting initiatives to areas of need, such as primary and preventive healthcare.

Enabling the delivery of primary healthcare services needs to be connected to secondary and tertiary healthcare, in terms of patient and data flow, “if we are putting an effort to create the history of a patient at a PHC centre, this needs to follow the patient to secondary and tertiary healthcare…we need to look at digital healthcare from a point of data transfer, and then service delivery.” This requires stakeholder consultation, “making sure that public and private partners are sitting at one table, talking as partners, giving suggestions, coming up with one holistic workflow for digital healthcare for Pakistan.” This could result in remarkable change at the primary healthcare level where the majority of healthcare issues lie.

Innovations come and then governments follow. This can be a blessing in disguise, “we have the ability to be a partner in the conversations that are happening at policy level. Otherwise, we would have had to follow a policy that was created by someone somewhere in the past, and that had some things which might not be suited to the world of today.”

If you would like to share your story with us, please get in touch with the Country Connector on Private Sector in Health. We seek to create country connections and promote learning from practice of governance of the private sector in health. Please visit the research channel for more details on the governance behaviours research framework, which guides our work.